Home » Blog » The Deal on DASH 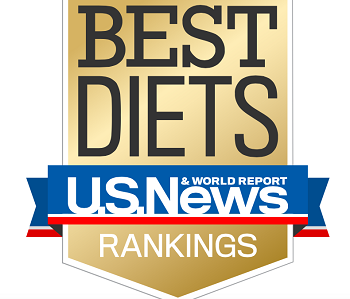 Recently, US News and World Report published its annual diet rankings, and as usual, DASH was at the top. This is irresponsible. The DASH diet was designed to help reduce blood pressure for people with hypertension. It makes no sense to recommend this diet to a general population, for the main reason that DASH has pretty much only ever been tested on hypertensive ore pre-hypertensive subjects, who cannot be generalized to the population at large. Moreover, all trials have been short term, with outcomes indicating that DASH may actually cause heart disease–not prevent it.

Facts about the DASH Diet and preventing nutrition-related chronic disease:

I’ve drawn evidence from a list of DASH studies in the 2015 US Dietary Guidelines advisory committee report, which cited DASH studies as evidence that its “Dietary Patterns” could prevent heart disease–but none of these trials clearly supported that assertion.

Intervention: All subjects received a control SAD for 3 weeks, then randomized to (i) control (ii) a diet rich in fruits and veg (FV) or (iii) a “combination diet” (combo) rich in fruits, veg, and low-fat dairy with reduced total and sat. fat; 8 week intervention. Note that combo and FV have similar % energy of fat and SFA while combo is lower in both.

Results: Systolic and diastolic BP were reduced by FV and further reduced by combo. CVD outcomes were mixed: LDL-C was reduced , but so was HDL-C.

Limitations of the data for generalizing to all Americans: Only outcome tested was blood pressure, and subjects were all a non-normal, hypertensive population.

Limitations of the data for generalizing to all Americans: Only outcome is BP and on a non-normal, hypertensive population. Not acceptable as advice for the general population.

Results: “changes (in the DASH diet compared to controls) represented net reductions of 7.3%, 9.0%, and 7.5% in mean concentrations of total, LDL, and HDL cholesterol, respectively.” No significant changes in TG  (trended up), TC:HDL, LDL:HDL. No significant changes from FV diet in the whole study group (LDL, HDL, TG trended down and approached significance at p = .055), some significant lipid changes observed in some groups (i.e. men and non-African Americans saw reduced TC:HDL). “higher baseline HDL was associated with greater reductions in HDL.” “The observation that reduced-fat diets lower HDL has led to controversy over the advisability of lower-fat, higher-carbohydrate diets and whether CHD risk is reduced when HDL is lowered along with LDL.” “The DASH diet substantially reduced systolic and diastolic blood pressure, caused favorable changes in total and LDL cholesterol, resulted in no changes in triacylglycerol, and reduced HDL cholesterol.” To determine total effect of lipid changes (some good, some bad) they used the Framingham equation and estimated 10-y CHD risk decreased by 12.1% in DASH and increased 0.9% in control.

Limitations of the data for generalizing to all Americans: Adherence to DASH reduced risk based on Framingham equation, but the  drop in HDL and upward trend in triglycerides indicate worsening CVD risk. On a non-normal, hypertensive population.

Limitations of the data for generalizing to all Americans: Only outcome is blood pressure and on a non-normal, hypertensive population.

Results: Despite clinically significant reductions in blood pressure, the DASH diet alone, without caloric restriction or exercise, resulted in minimal improvements in insulin sensitivity or lipids pertinent to CVD risk.

Limitations of the data for generalizing to all Americans: The only meaningful change was in blood pressure. The DASH diet did not otherwise result in beneficial cardiovascular effects; ON a non-normal, hypertensive population.

Results: “Despite a slight decline in the prevalence of the MetS and its features, we failed to find a significant effect of recommendations to follow the DASH diet on most of its features.” “No significant changes were found in glucose and lipid profiles.

Results: Blood pressure was reduced in all diets from baseline. HDL-C dropped on high-carb and high-protein diets but not high-mono diet. Triglyercides dropped on high-mono and high-protein but not high-carb. LDL-C was only lowered on the high-protein diet, when compared to high-carb. High-carb diet had worst outcomes in all comparisons. In other words, The low-fat, highest carb diet, which most closely resembles the DGA Dietary Patterns, had the least favorable CVD outcomes, compared to the diets higher in protein and unsaturated fats.

Limitations of the data for generalizing to all Americans: On a hypertensive population, not acceptable as advice for the general population.

Intervention: 412 subjects with BP over 120/80 including stage 1 hypertensive; 2 wk run in (high Na control); randomized to control or DASH matched at 1 of 3 Na levels – hi (150 mmol/d, reflects average consumption), intermediate (100 mmol/d, reflects guidelines upper limits), or lo (50 mmol/d, hypothesized to produce greater benefits); parallel crossover where each subject ate their assigned diet (con or DASH) at each Na level for 30 days, so it appears the crossover is only per Na level, not diet.

Limitations of the data for generalizing to all Americans: Only outcome is BP and results are limited to those with raised blood pressure. Not acceptable as advice for the general population.

In sum, a total of 2,162 people have been studied on DASH, in trials nearly all of which lasted 8 weeks or less. Only 60 of these 2,162 subjects were normal (not hypertensive/pre-hypertensive), and those 60 were adolescent girls.

The above is not a systematic review, obviously, so please feel free to let me know what is missing.

Note that when a small “high-fat DASH” study was conducted, it outperformed a regular DASH diet on improving cardiovascular risk factors. This is consistent with evidence that the vast majority of higher-fat diets outperform low-fat, high-carb diets on nearly all outcome markers.

If you use this evidence summary, please cite this post. Thank you!

6 thoughts on “The Deal on DASH”