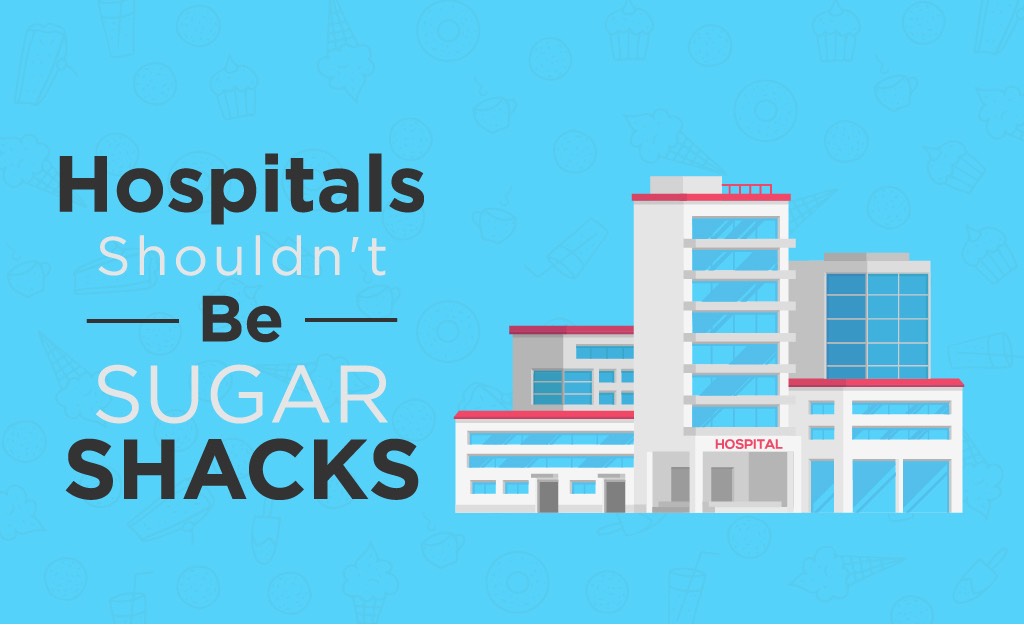 The pervasive presence of sugar in hospitals and other public spaces has been in headlines recently, as doctors on both sides of the Atlantic have protested that hospitals, which are ostensibly about health, should not become veritable “sugar shacks.”¹

It’s estimated that 20% of hospitals have fast food restaurants on the premises, with twice that number in teaching hospitals.² Obviously, food must be available for patients, visitors and staff, but the amount of sugar-laden foods in most vending machines and cafeterias is staggering. 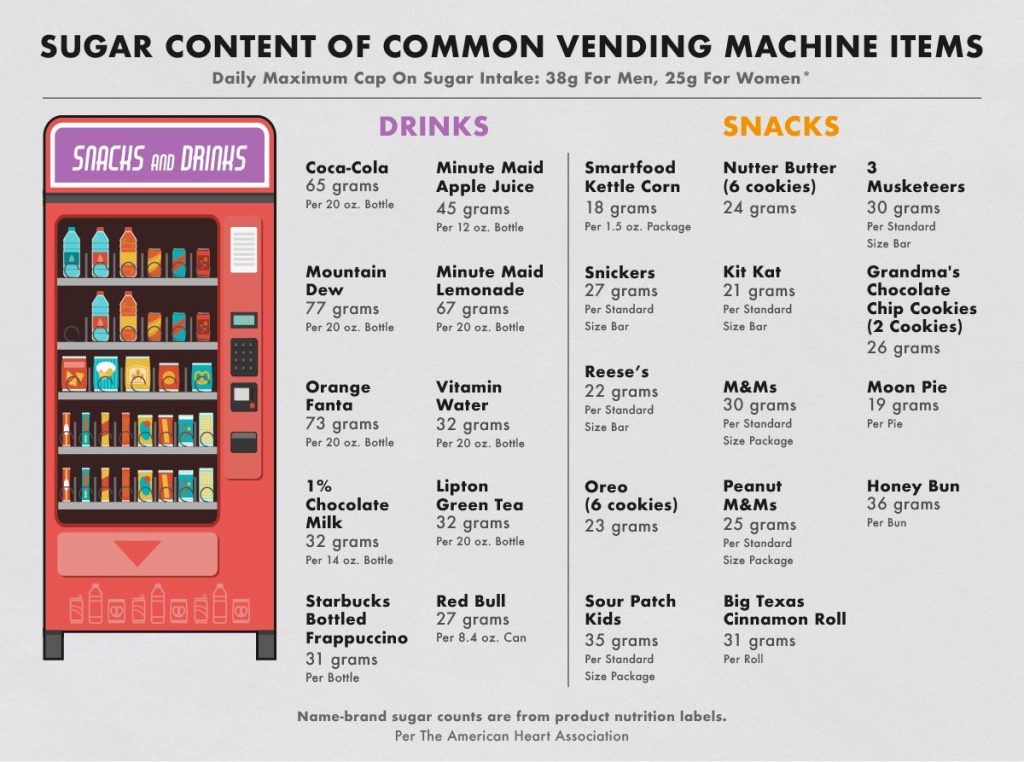 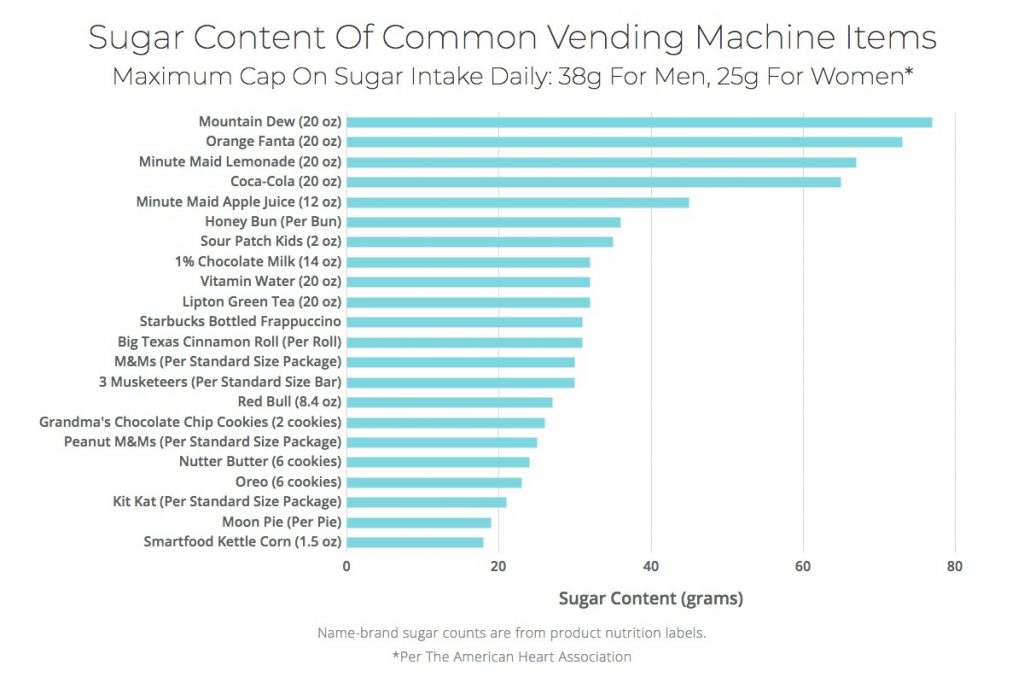 One bottle of Mountain Dew, a popular soft drink, contains 77g of sugar. Many snacks found in vending machines, such as Reese’s Oreos, and Honey Buns, have over 20g of sugar each. Even “Vitamin Water,” which is fortified with extra nutrients, contains 32g of sugar–not so smart.

Hospitals are the place where people go to improve health, but the abundance of unhealthy foods sends a conflicting message. This is why some doctors are campaigning for change–to curtail access to unhealthy foods in hospitals.

In England, cardiologist.Aseem Malhotra first noticed the problem back in 2013 when he saw a patient eating a burger and fries the day after having undergone an emergency angioplasty. When Dr. Malhotra confronted the patient, the response was simple – this meal had been served to him by the hospital staff. Seeking to redress this problem, Dr. Malhotra made a motion at a meeting of the British Medical Association (BMA) to ban junk foods from hospitals. The campaign gained widespread support and passed overwhelmingly. The ban was enacted as BMA policy in 2013.³

Dr. Malhotra has also written countless articles on the issue, including a notable piece for The BMJ in which he asserted that “an oversupply of nutritionally poor and energy dense foods loaded with sugar, salt, and trans fats—fueled by the junk food industry’s aggressive and irresponsible marketing—has even been allowed to hijack the very institutions that are supposed to set an example: our hospitals.”⁴ Dr. Malhotra co-founded Action on Sugar, a U.K.-based nonprofit that aims to educate people about the dangers of sugar and how to reduce its consumption.

Meanwhile, in the U.S., Dr. Mark Cucuzzella, a family physician at the Jefferson Medical Center (JMC) in West Virginia and a professor at the West Virginia University School of Medicine, saw a huge disconnect between the diet advice he was giving to patients and the food available to them at his hospital. In an op-ed published in Salon, Dr. Cucuzzella describes the scenario of a surgery patient who is asked to avoid solids and drink only clear liquids. Following this advice, the patient consumes such drinks as Sprite, with over 30g of sugar. Post surgery, the patient is then given a protein shake that has four times the daily recommended amount of sugar.

Dr. Cucuzzella launched the “The “Sugar-Free JMC” initiative at his hospital to remove sugar from the cafeteria, vending machines, and patient trays. This initiative led to the staff altogether losing hundreds of pounds.

Dr. Cucuzzella now visits other hospitals to spread awareness about the issue and explain how a sugar-free or low-carb approach can be implemented in large institutions.⁵

Most recently, the University of Pennsylvania healthcare system pledged to eliminate soft drinks, sports drinks, and juices with added sugar from its vending machines in order “to ensure that the food its serves aligns with its missions to care for, educate and empower patients who are coping with heart disease, diabetes, and many other illnesses.”⁶

Along with U. Penn, other hospital systems around the country, such as Seattle’s Children’s Hospitals and St. Luke’s Hospital and Clinic in Duluth, MN, are starting to limit patient access to sugary drinks and foods.⁷ The movement appears to be spreading.

One could argue that hospitals shouldn’t play food police to the public, but they’re already dispensing drugs and devices to improve health. Thus, for nutrition-related diseases, wouldn’t healthier food be the best medicine?