Home » Blog » What Are The Most Popular Cheeses In Every State?

The Cheese-lover’s Tragedy is illustrated by the words of a French woman I met, who lamented to me, “I love cheese so much, but I don’t eat it much, because I fear orphaning my children!” Her dread, specifically, was heart disease.

While my work as a journalist is mainly serious, devoted to a rigorous understanding of science, it’s nice to remember the surprising pleasures that come from realizing that many foods which have been demonized for decades are actually healthy. Cheese is one of those foods.

Cheese, with an endless diversity of tastes and textures, is nearly always a perfect snack. It’s also delicious melted in an omelette or even just fried. In fact, there are entire websites devoted to fried cheese, and after trying some of that crispy, gooey goodness, now I know why.

Many people are afraid to eat cheese, however, due to its saturated-fat content. That is because since the 1960s, officials have singled out these kinds of fats in products like cheese, butter and meat as the cause of heart disease–and Americans have come to believe this advice.

The problem? The evidence doesn’t support that idea. And it never has.

In recent years, teams of researchers around the world have re-examined the evidence on saturated fats, and these researchers have concluded that saturated fats do not, after all, have any effect on cardiovascular or total mortality. It turns out that the advice to avoid saturated fats as a measure of protection against heart disease was never supported by strong evidence.

Although saturated fats do raise the “bad” LDL-cholesterol a bit, they are also the only known food that can effectively raise the “good” HDL-cholesterol, meaning that overall, the impact of these fats is likely neutral or–given that HDL-C is a highly reliable predictor of death from heart disease–even beneficial.

Cheese has also long been feared for the dietary cholesterol it contains, but over the past five years, officials have reversed themselves on this advice and dropped all caps on cholesterol. The American Heart Association ditched theirs in 2013 followed by the U.S. Dietary Guidelines in 2015.

So, in sum: the main reasons you feared cheese–cholesterol and saturated fat–have crumbled. Like a fine feta on a Greek salad.

And what are the reasons for eating cheese? Cheese contains healthy vitamins and minerals that our bodies need to function properly, such as calcium, zinc, phosphorus, magnesium, vitamin A, vitamin B2 (riboflavin) and vitamin B12. Also, fat and protein are more satiating than carbohydrates, so a serving of cheese will leave you feeling more full, for longer, than a serving of bread. All of this leads one to conclude that cheese is good for health.

With this in mind, I began wondering what were the most popular cheeses in every state. After a little research, I found some interesting answers!

Although I’m used to poring over scientific papers and studies when researching my work, in this case I turned to Google Trends, a source of data that is just a bit more accessible.

After compiling a list of nearly 30 popular types of cheese, I ran each one through Google Trends to find how frequently each had been searched over the past year. By default, this process returned global search rates, and from there I was able to narrow the results geographically, ultimately finding search data on each individual cheese for all 50 states and Washington, D.C.

After compiling the results and finding the most searched-for cheese in every state, one insight in particular became clear: American tastes in cheese are as diverse as the country itself. Rather than a single cheese dominating from coast to coast, a truly diverse blend of favorites emerged, with 22 different cheese types claiming the top spot in at least one state, and no single cheese occupying the top spot in more than eight places.

For those interested in the final state-by-state results, they are as follows: 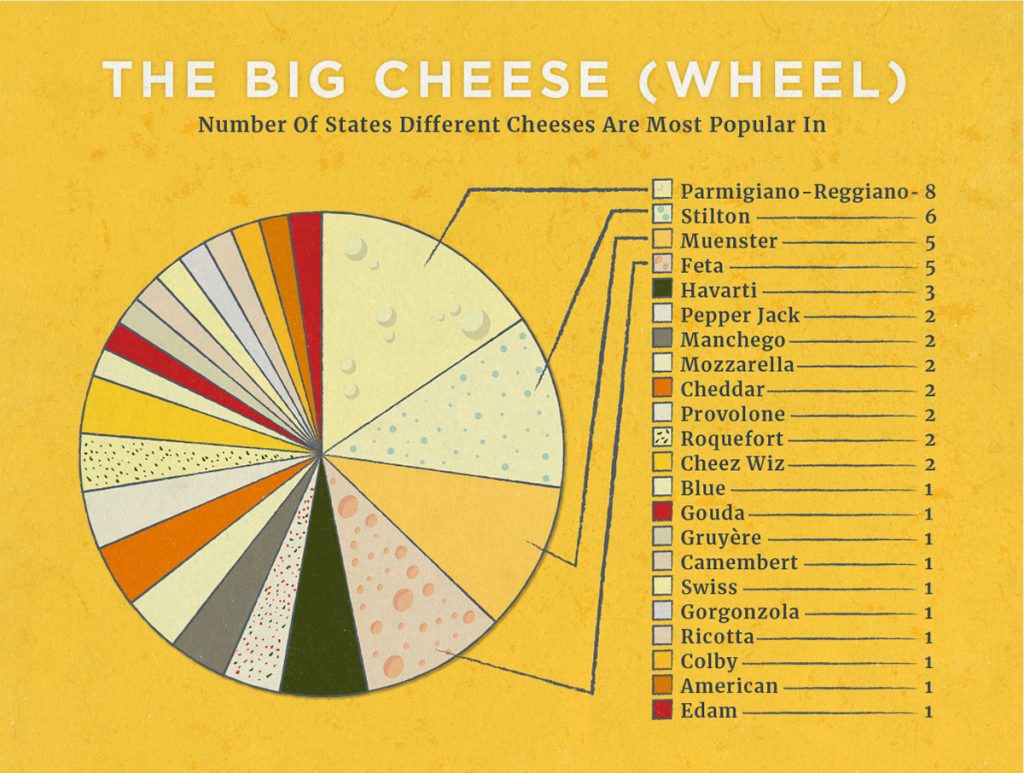 While the results of this study were diverse, there was still a clear winner in terms of popularity: Parmigiano-Reggiano, better known as Parmesan, proved to be the most-searched cheese in over 15% of the country, taking the crown in 8 of the 51 states surveyed. Only three other types of cheese were able to lay claim to the title of Most Popular in at least five states: the English-produced Stilton, the semi-soft Muenster, and the salad staple, Greek Feta. Ten different cheeses occupied the number-one rank in only a single state–all beaten by Cheez Whiz, the top cheese in two states: Oklahoma and West Virginia. 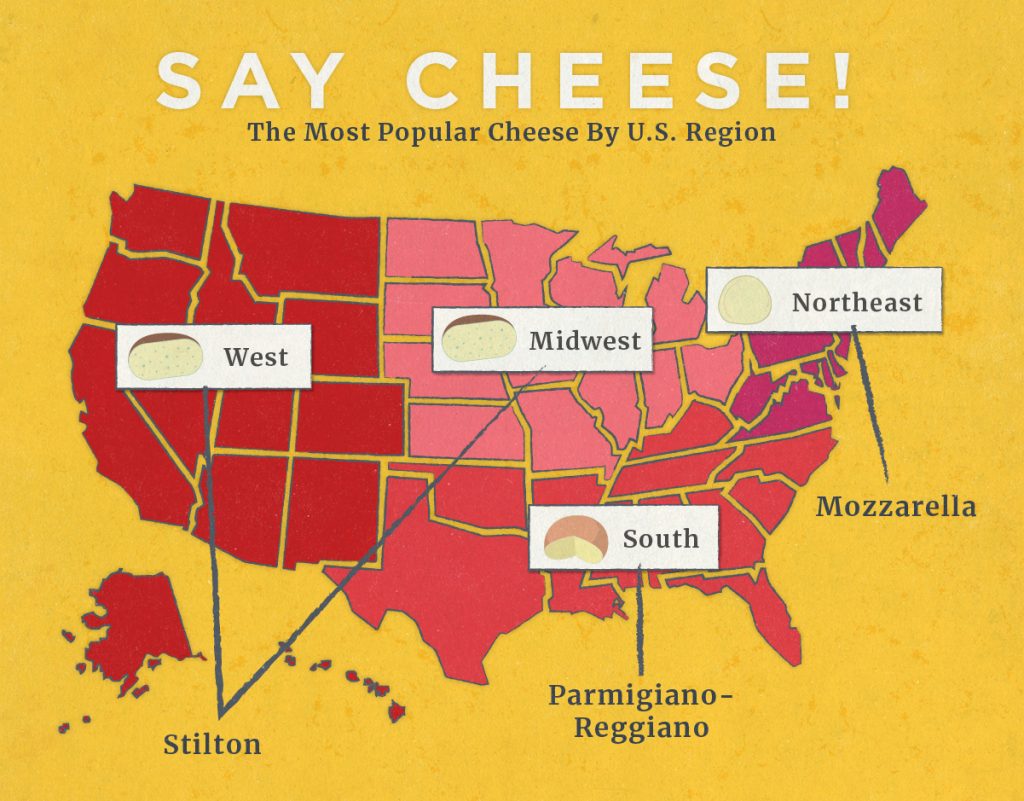 Evaluating the results by region provided some illuminating insights. Southerners were the leading Parmesan enthusiasts, while both the West and Midwest are Stilton Country. Mozzarella is the most popular cheese in two of the largest states in the northeast–New York and New Jersey–and that’s enough to carry a region with otherwise diverse tastes.

Did your favorite cheese win in your state, or are your tastes more eclectic? Even if your personal preference doesn’t align with these results, next time you sit down to enjoy a meal don’t let unfounded fears of cholesterol and saturated fats prevent you from enjoying this favored food, a part of human culture for millennia and a palatable pleasure.

2 thoughts on “What Are The Most Popular Cheeses In Every State?”